Another quick test of my Leap Motion capture app, this time with some fancier rigging. Bonus: got it working in CC 2014!

I’ve been building a tool for recording 3D motion tracks, camera moves and hand gestures direct to the After Effects timeline with the Leap Motion.

There’s still a ways to go yet on development. I have to create the UI and tweak the hand puppet rig (and, um, make the hand tracker work with right hands…), but I think this is going to be a useful addon for both literal hand-animation stuff like UI demos and pre-animating gestures for Character Animator puppets, as well as more subtle things like organic camera shake.

The Leap is quite precise in its data — you can even tell different people’s hand tracks apart.

I’ve spent a lot of time recently creating the latest version of KinectToPin’s UI Panel for After Effects. It has a ton of great new features, and makes things a lot easier to use.

But now that that’s out, I’m working on something new that gets around one of the biggest remaining issues with rigging 2.5D Kinect characters: automating layer scaling based on Z-distance. It’s one of the most annoying things to deal with, and until now the best options were “stay in one depth plane” or “manually scale things up and down.” Ugh.

The guy on the left is what happened if you walked back and forth toward the camera and didn’t account for it:

The little expression I came up with this morning turns the same character with the same mocap data into the guy on the right.

The new code will be added to the UI Panel shortly, but if you’re eager to try it out, here it is:

In the 3D template, set this as the “mocap” layer’s position expression:

I swear, it seems like the main thing I’ve been doing for the last year and a half is finding ways to make people’s heads stop flying off. This is yet another.

Had a great time at last night’s Volumetric Society meetup at Pratt. Thanks to everyone who came! Here’s the presentation, complete with some prerecorded versions of the demos:

Storify recap after the jump!
END_OF_DOCUMENT_TOKEN_TO_BE_REPLACED

We’re doing a DIY motion capture workshop this Tuesday night at the Volumetric Society meetup at Pratt in Brooklyn.

It’s open to everyone, and we’ll be showing off some cool new features of KinectToPin.

After a lot of work (and not a lot of sleep), the all-new KinectToPin has arrived. It’s Kinect motion capture for After Effects in one convenient package! Well, actually, two convenient packages: KinectToPin now includes both a standalone capturing app and an After Effects UI Panel plugin. It’s also about a million times easier to use, and has a ton of new features — automatic setup and rigging (no more coding), direct XML import, 3D features, audio playback during capture… I’m tempted to quote the RUCKUS NYC Kickstarter infomercial and say “And it just! Keeps! Going!”

It also has a snazzy new website all to itself: kinecttopin.fox-gieg.com. Download it and give it a try, I’d love to see what you can do with it! 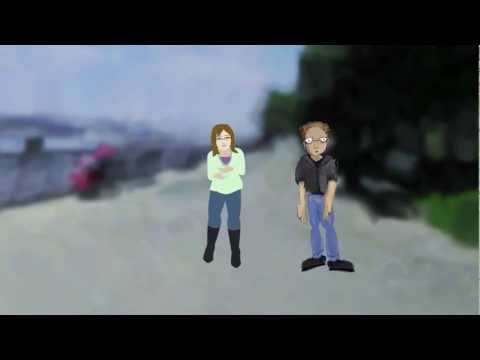 Instead of keyframing the characters by hand to match the existing audio track, “Machine Politics” was created using Kinect motion capture. I think the visuals add a lot to what was already one of my favorite bits we’ve ever done. There are a few spots where it gets a tiny bit uncanny valley, but there are also moments that really freak me out with how natural-looking they are. Kevin’s facial expressions in particular just… look like Kevin. It also looks like a real live panel game! And using the traditional panel show format lets us get around some of the serious limitations to this technique (i.e. characters can only face forward).

The skeletal tracking data was captured in Processing with KinectToPin running SimpleOpenNI, then applied to multi-layered puppets rigged in After Effects. Facial animation was done with a combination of automatic lip sync to audio waveforms and a couple of Motion Sketch nulls controlling smile-vs-frown and eyebrow height. I then switched between the 10 different camera angles (all using the same puppet precomps as sources) by bringing them into Premiere via Dynamic Link and creating nested multi-cam sequences.

All that meant there was a lot of asking software to do things it wasn’t meant to do, and I spent a good bit of the animation process going “I can’t believe this is actually working…” There were a few hiccups, though, and lessons learned for the future: next time I’m going to do the sequence edit before I add the Kinect and lip sync data — there were close to a million keyframes in the project at that point and Premiere really started to choke. But now that everything’s rigged and ready to go, I could probably turn around a new episode in a single day. Which, for several minutes of full-color, full-motion animation, is insane.

Things are about to get interesting.

This tutorial is now obsolete. Check out the new KinectToPin website for the latest version of the software and how to use it — it’s dramatically easier now.

Kinect MoCap Animation in After Effects

Quick note: the text is just transcripts of the videos, so you can read or watch as you prefer.

Welcome back. You have your USB adapter and you’ve installed all the software I linked in Part I, right? Now it’s time to get KinectToPin up and running. END_OF_DOCUMENT_TOKEN_TO_BE_REPLACED